How to Install Newari Font? 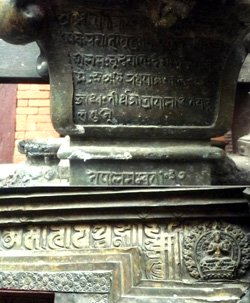 
Forget Gurkhas, the Newar people had been the rulers of the Kathmandu valley for over many centuries and still are. They call the Kathmandu valley "Nepal", and their language "Nepal Bhasha" the language of Kathmandu Valley or Nepal. While their writing was called "Nepal Lipi" or "Nepaalalipi". In the temples around Kathmandu Valley you can see their writing carved either into stone or wood, or embossed in brass or other metals.

There are two distinct styles of writing, an ornate style with many long downward strokes which they call "Ranjana", and a more rounded style which they call "Prachalit". Both of these Newari Fonts can be downloaded by clicking on the above link.

While these two are not the oldest examples of their writing, very old examples can be seen in the Patan Museum nearby. Other styles of writing have also appeared. Rabison Shakya in his book on how to write Nepal Bhasa identifies a third style which he refers to as Bhujimmola, while Hemraj Shakyavansha (1985) identified 9 styles. Different styles appear to have been used for different purposes – Ranjana for sacred and religious texts, Prachalit for everyday secular writings and Bhujimmola for administrative purposes.

Other styles of writing have also appeared. Rabison Shakya in his book on how to write Nepal Bhasa identifies a third style which he refers to as Bhujimmola, while Hemraj Shakyavansha identified 9 styles. Different styles appear to have been used for different purposes – Ranjana for sacred and religious texts, Prachalit for everyday secular writings and Bhujimmola for administrative purposes. 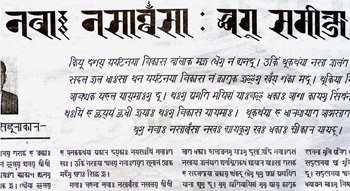 Around 1998, a proposal was submitted to Unicode by a committee in Nepal for a distinct encoding for the writing of Nepali, to include three common consonant compounds (conjuncts) - {tra}, {ksha}, and {gya} - that collate separately and are taught as part of the basic alphabet in Nepal. This proposal was rejected on the basis that the three conjuncts distinguished did not define a writing system difference and should continue to be treated as conjuncts with the collation differences handled through collation algorithms. This seemed fair enough, and after this software was developed for the Nepali language working with the Unicode Devanagari code block.


In 2001 the Unicode expert Michael Everson posted a proposed code block which he named “Newari” and illustrated with graphic characters from Ranjana, and also about the same time he posted a draft code block named “Nepali” and illustrated this with graphic characters from Prachalit (this posting is no longer available); what is singular about these drafts was their inclusion of the same three conjuncts,

Though the Newar community already had 8-bit hack fonts for their writing (the book by Shakya (2002) could be viewed as a description of his 8-bit hack fonts), a number of Newar activists began to take an interest in Unicode standards for Newar writing, with ideas expressed as proposed code blocks. A meeting of the Nepal Lipi Guthi in July 2008 explored the ideas that each style of writing should be separately encoded and that the actual shapes of the characters should themselves be standardised.

I became involved at about this point, and studied the book by Shakya to find out more about the writing of Nepal Bhasa, and how it differed from Devanagari which I knew was often used to write Nepal Bhasa. Shakya gives small tables of the basic characters of the writing, for Ranjana, for Prachalit, and for Bhujimmola, but to my surprise these were not equivalent, the Prachalit tables had significantly more characters, as can be seen in Figure 5 for the consonants of the three writing styles.