After you type a word in English and hit a space bar key, the word will be transliterated into Nepali. You can also hit a backspace key or click on the selected word to get more options on the dropdown menu.

The process of transliterating Nepali to English is very quick and allows unlimited characters and words to be transliterated. Moreover, when you enter the space bar, the text will be saved on your computer automatically. So in case of a browser crash or on the second visit, the previously transliterated text would be recovered.

Once you have finished typing you can email them to anyone for FREE of cost. Alternatively, you can copy the text and share it either on social media such as Facebook, Twitter, blog, comment or paste it on the Word Document for further formatting and processing of the text.

Nepali is written with the Devanagari alphabet, developed from the Brahmi script in the 11th century AD. It contains 36 consonants and 12 vowels. In addition, it has its own representations of numbers that follow the Hindu-Arabic numeral system.

How can I type Nepali language?

Typing Nepali is very easy on our website. You can start by typing in Latin letters (e.g, a, b, c etc), which will then be converted to characters that have similar pronunciation in the Nepali Language.

To give you an example, if you type in "Namaste" it will be converted to "नमस्ते".

Additionally, you will get a list of matching words on the dropdown menu when you press backspace or click on the word.

Our Nepali transliteration also supports fuzzy phonetic mapping. This means you just type in the best guess of pronunciation in Latin letters and our tool will convert it into a closely matching Nepali word.

What is Nepali transliteration?

Nepali transliteration is a process of phonetically converting similar-sounding characters and words from English to Nepali. For Example, you can type in "Tapai kasto cha?" in Latin to get "तपाईंलाई कस्तो छ?".

You can use our online Nepali input tool to transliterate unlimited Nepali words for FREE. Our online software is supported on both desktop and mobile devices such as Apple iPhone, Xiaomi Redmi Note, Samsung and more.

What is Nepali translation and How can I translate it?

Nepali translation is a process of converting word or sentence from one language to Nepali and vice versa. For instance, typing "Nepal is the birthplace of Lord Buddha." in English will be translated into "नेपाल भगवान बुद्धको जन्मस्थल हो।".

What is Nepali Unicode?

Nepali Unicode is a set of unique numeric values that is assigned to display Nepali characters, letters, digits and symbols. You can view the complete set of Nepali Unicode Character Code charts by visiting The Unicode Consortium.

Once in Nepal, communities remained completely isolated by steep valleys, high mountains and by thick forest, leading to the evolution of many distinct languages, given as 92 in the 2001 census but now put by ethnologue at 124 distinct living languages. This increase in number seems mostly related to distinguishing dialects within larger groups previously thought to belong to a single linguistic community. Ethnologue’s linguistic map for Nepal, reproduced in Figure 1, shows the hot spot of languages scattered across the country. 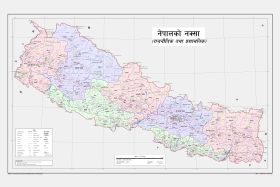 Note that cross border languages, and particularly Maithili and Bhojpuri, also have their own mature literature and may be written in their own distinctive script; for Maithili the script is known as Mithilakshar or Tirhuta, for Bhojpuri it is Kaithi.